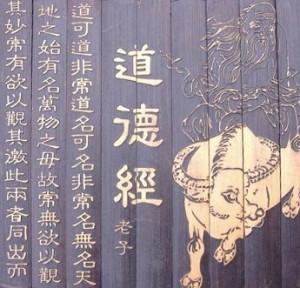 “Tao Te Ching” is the Wade-Giles romanization of the original Chinese title. Depending on the specific set of rules one follows, it can also be written like “Tao-te Ching” — with the hyphen and the second character in lowercase.

With Pinyin romanization, the same three characters may be rendered as:

Here, the joining of words also depends on the specific set of rules in effect. From a linguistic perspective, it’s preferable to keep the words separate, in order to avoid unintended side effects. However, most Chinese scholars, lacking sufficient knowledge of English, remain unaware of potential problems.

In English, the title “Tao Te Ching” has been translated in a variety of ways. Most of them are inaccurate and reflect a certain desire to inject additional meaning into the translation. For instance, one popular rendering, “The Book of the Tao and Its Power”, has the following errors:

To see the better way to translate the title, we can work on it character by character:

This is now an English word, appearing in all major dictionaries. If it weren’t, we would have to translate it as “the Way”. This would not be completely satisfactory, because “Tao” means so much more, so it’s a good thing this word has officially become part of the English language.

Nowadays, translating Tao as “the Way” is like translating “deja vu” as “already seen” — not optimal and not necessary. Tao can and should be left as it is.

This is best translated as “virtue.” By coincidence, the English word captures the Chinese word’s dual meaning — human goodness as well as the inherent power in things.

Translating Te as “power” loses one half of the the above. Translating it as “integrity” loses the other half. “Virtue” is better.

This is often translated as “book,” which is certainly not the best choice. The closest Chinese character to “book” is shu. The status of ching is higher and more respected than shu, so it’s really more like “tome” or “classic.” “Tome” would sound rather odd, so we’ll point to “classic” as the best way to translate Ching.

Bring all of the above together, we get the following:

“And” here is implied by the fact that it’s two works joined together as one. Other than “the,” this is really the only word that can appear in the English title that is not explicitly stated in Chinese.

As you can see, there is nothing in the original title that corresponds to or implies “its.” Inserting “its” into the English title is an unnecessary adornment that distorts the original meaning and adds nothing of value.

The original title, like everything else from Lao Tzu, is plain and simple — and therein lies its power. The best thing we can do is to let it be true to itself. So once and for all, the Tao Te Ching means the Tao and Virtue Classic — nothing more and nothing less.