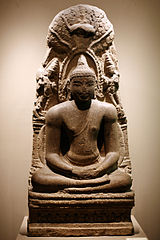 After much consideration, Shenxiu came up with an idea. Instead of submitting the poem directly to the Fifth Patriarch, he would write it on a wall anonymously. Everyone would see it as they went about their business during the day, and if the Master were to praise it as a good example of what he wanted, then Shenxiu could reveal himself as the author.

Having made up his mind, Shenxiu sneaked out of his room in the middle of the night. He went to the wall and wrote:

The next morning, the Fifth Patriarch walked by the wall and saw what Shenxiu had done. He gathered the disciples around and said to them: “Pay your respects to this poem. Commit it to memory, recite it every day, and you will be able to attain enlightenment.”

That night, the Fifth Patriarch summoned Shenxiu to him. He got straight to the point: “You wrote that poem, did you not?”

Shenxiu bowed deeply: “Yes, Master. I did it not to seek the inheritance of your mantle, but only in the hopes that you would let me know how much understanding I have actually demonstrated.”

The Fifth Patriarch said: “Your poem shows that you have not yet perceived the true self. You are outside the door, unable to enter. This is not the way to attain the ultimate wisdom. At that level, it would take only a few words to reveal the original nature — that which was never born and can never die. You would be able to see it clearly at any time. Your mind would flow with it naturally and express it effortlessly. I want you to go back to your room. Think it over for a day or two. Write me another poem. If I see that you have entered the door, I shall pass my position over to you.”

Shenxiu knew his Master was right about his limitations. He tried to write another poem, but his mind was unsettled, as if he was in a dream. Although all the disciples still respected him as much as ever, he could see that he was not ready for the Patriarch’s position of spiritual authority.

Bodhi means enlightenment and wisdom. The bodhi tree has heart-shaped leaves, and grows on the banks of a tributary to the Ganges River. It is so named because the Buddha sat under such a tree in meditation when he experienced his great awakening.

In the poem, Shenxiu compares the human body to the bodhi tree. This is an indirect reference, connecting human spirituality to the Buddha sitting by the tree. His meaning is quite clear: all sentient beings — you and I and everyone else — have the potential to attain the ultimate wisdom, just as the Buddha did.

Shenxiu also compares the mind to a mirror stand. This is another indirect reference, and this time it is a focus at the individual level, connecting your spiritual self to the mirror that is supported by the stand. This perfectly captures the relationship between the mind and the spirit, while creating a striking parallel between the first two lines.

According to Shenxiu, your spirituality must be kept clean at all times, just like the mirror. The dust motes in his poem refer to all the distractions and temptations of the material world. To keep yourself clear of them, you must practice diligently. To wipe the mirror is to engage in meditation, reciting scriptures, and performing rituals.

The Fifth Patriarch agreed with Shenxiu on the value of diligence. That was why he told the disciples to memorize the poem. At the same time, he also knew diligence was only the starting point, the prerequisite. It would get you to the door of enlightenment, but not through it.

The doorway led to what the Fifth Patriarch called the ultimate wisdom, and this was what Shenxiu had trouble comprehending. He excelled at scholarship, but this was beyond all scholarly knowledge. He advocated hard work, but this was beyond any measure of diligence. His Master was quite willing to give him another chance… but the more he tried to come to grips with the truth, the farther it retreated from him.