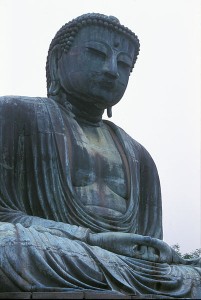 It was a long journey — especially for someone who had to walk the entire way. After about thirty days, Huineng finally reached his destination. He quickly located the Dongchan Temple, and presented himself before the Master.

The Fifth Patriarch was plainspoken and straightforward. He wasted no time speaking to Huineng directly: “Where are you from? What are you looking for here?”

Huineng replied: “Master, I am a commoner from the Lingnan province. I have come a long way to pay my respects to you. I seek nothing other than to become a Buddha.”

The Fifth Patriarch regarded this young man and used a scolding voice: “You are a commoner from the south, and also a barbarian. How can a barbarian hope to become a Buddha?”

Huineng was unruffled as he responded: “Although people are differentiated in terms of north and south, in Buddha nature there is no north or south. The body of the barbarian may be different from that of the monk, but what difference is there in terms of Buddha nature?”

This response impressed the Fifth Patriarch. He wanted to talk more, but stopped himself because there were quite a few disciples around. He ordered Huineng to help them with their daily tasks.

Huineng was only too happy to follow the order. He knew it meant he was now accepted at the temple to live, work and study under the Fifth Patriarch. It was the starting point of his formal path of spiritual cultivation.

Huineng was quite aware of the prejudice in his world. The tall northerners of ancient China often looked down on the smaller and shorter people from the south. It was a harsh judgement based on external appearance — not so different from the discrimination we see today in our world. It seems we haven’t advanced much as a species in the 1,300 years since Huineng’s time.

We don’t need to let ourselves be discouraged by the above. Prejudice will exist as long as ignorance exists, so humanity still has a long way to go, and there’s still plenty of senseless hatred out there. We may not be able to change all that, but we can certainly face it with Huineng’s wisdom.

“Buddha nature” is the natural potential to attain enlightenment inherent in all sentient beings. There is no levels or variations in this potential. It is the Buddha within that will awaken one day. This is the same for everyone, no matter who you are, how you look, or where you come from. There is no north or south in it — as Huineng remarked.

There is no east or west either. One does not need to be Asian to have Buddha nature, nor does one need to be a Buddhist. You have the potential to be enlightened, regardless of the specific spiritual path you follow. You may have a different name for it, but it is the same thing, and it’s been there all along.

The Buddha nature is what matters in the end. The physical self is transient. It will grow old and die. The beauty of youth will fade and wither in time. The Buddha nature, on the other hand, is eternal. It will still exist long after the body is gone. The wisdom you have perfected within yourself will be yours to keep forever.

This realization will help you cut through the illusions of the material world. You may come across racism from time to time, like Huineng facing prejudice in his world. Remember his words, and you will be able to see the emptiness of racist ignorance.

Just as those words marked the beginning of Huineng’s learning at the temple, they can also mark a new level of learning for us. It’s a process where we focus on the true essence, rather than the surface appearance. As we do this, and liberate ourselves from our illusory attachments, the Buddha within… will begin to stir from its slumber.