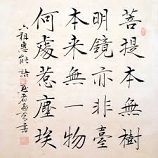 After a couple of days, a young monk passed by the kitchen, reciting Shenxiu’s poem. As soon as Huineng heard it, he knew it did not express the essence of true nature. Feeling curious, he approached the young monk: “What is this poem you are reciting?”

The young monk looked him over and said: “You are an ignorant barbarian, so of course you would not know. Our Master told us he wished to name his successor, so he ordered us to write a poem to demonstrate our understanding. The one who understands the dharma best will become the Sixth Patriarch. Our teacher Shenxiu wrote his poem on a wall, and the Master told us to recite it. He said if we follow its words in spiritual cultivation, we will reap great benefits.”

This made Huineng even more curious. He said to the young monk: “I would like to recite it too, but I do not know where the wall is. Can you take me to it, so I can pay my respects?”

The young monk took Huineng to the wall. Huineng saw the poem, but could not read it because he was illiterate. There was a visitor nearby, a government official by the name of Zhang. He was able to read it out loud for Huineng.

Huineng bowed to Zhang: “Sir, I also have a poem. Can you help me write it on the wall?”

Zhang reacted like the young monk, not taking Huineng seriously. He said in a mocking tone: “You know how to write poetry too? Now that would be extremely rare indeed!”

Zhang was surprised by Huineng’s words. He dropped his attitude, and wrote on the wall as Huineng dictated:

Bodhi really has no tree
Nor is clear mirror the stand
Nothing’s there initially
So where can the dust motes land?

Later that day, when the disciples saw this poem, they were all amazed. They discussed it among themselves, and one of them exclaimed: “Incredible! We really should not judge a person by his looks. How can someone like him attain the wisdom of a Bodhisattva in such a short time?”

The Fifth Patriarch saw what was going on. He became concerned that Huineng might come to harm due to envy and jealousy. He used his shoe to wipe away the poem and said: “This does not show the essence of true nature.” Upon hearing this, the disciples thought the Master must be right — Huineng was not so incredible after all.

Most people underestimated Huineng. When they looked at him, all they could see was an unremarkable barbarian from the south. He had a small build, darker complexion and no education. His social standing was below that of poor peasants and street beggars. Most people dismissed him as a nobody.

Our situation is not so different from ancient China. We may think we have more modern and advanced sensibilities, but discrimination is still alive and well in our society. All too often, people judge one another by external factors like looks, height, and ethnicity. As spiritual cultivators, we need maintain awareness of this, shift from the external to the internal, and focus on the content of character instead. We need to, in short, become more like the Fifth Patriarch.

The Fifth Patriarch was the only one who could see Huineng’s potential. As a spiritual master possessing genuine wisdom, he could look beyond the surface to assess someone’s true worth. He could tell that Huineng possessed tremendous intelligence and a powerful intuition, and Huineng’s poem proved he was right.

Huineng’s poem was a masterpiece that revealed the transient and illusory nature of everything. Shenxiu used the bodhi tree as a metaphor for the body, so Huineng pointed out that bodhi — the enlightenment of the soul — was not dependent on the body. It is the spiritual self that experiences the awakening to a greater reality. The physical self is only a temporary means for us to journey through the material world, and work toward that awakening.

Shenxiu compared the soul to a mirror, and the mind as the stand holding it, so Huineng pointed out that this, too, was not the ultimate truth. The soul is your true self, and it is eternally constant. The mind, like the body, is a tool created by the soul for the purpose of perfecting itself. This is why your mind is always changing — learning new things, evolving various ideas, and so on — but no matter how much it changes, you are still you. This “you-ness” that never changes is your true self, and it does not depend on the constantly changing states of your mind.

In the clarity of Huineng’s view, we can see that all the temptations and distractions of the world are just as illusory as the body and the mind. The difficulties we face may be challenging and exhausting, but they cannot last forever. Similarly, all the things we chase after — money, material possessions, fame and fortune — become completely meaningless when we die. Huineng said “nothing’s there initially” because none of it is real compared to the true self.

Seeing a great truth like this has a liberating effect. You learn to detach and let go. When people hurl negativity in your direction, you don’t feel the need to take it personally. When people flock to the latest fashion or technology gadgets, you don’t feel the need to jump on the bandwagon. It’s all just dust in the material world. To avoid getting too dusty, most people keep wiping their mirrors. You, on the other hand, can simply let the dust pass through. Your mirror is no longer present. You have relinquished ego and greed, thus revealing it to be just another illusion.

In only four lines, Huineng expressed a world of wisdom. The disciples did not realize it at the time, but Huineng’s poem would become an enduring classic, illuminating the path to Buddhahood for generations to come.