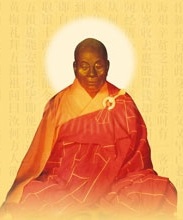 As soon as Huineng pointed out that the mind was moving, rather than the flag or the wind, Yinzhong sensed there was more to the situation. He invited Huineng to speak to the gathering, and as Huineng responded to additional questions about dharma, he became even more impressed. Huineng’s answers were accurate yet simple, without any esoteric words.

In admiration, Yinzhong said to Huineng: “You are most certainly not an ordinary individual. Quite some time ago, I heard that the Fifth Patriarch sent his successor southward, bringing the robe and bowl toward us. Could you be that person?”

Huineng replied that he dared not presume such an honor — but it became quite obvious to all that he was indeed the one. Yinzhong bowed and asked to see the robe and the bowl. These were shown to everyone, confirming Huineng as the Sixth Patriarch.

Yingzhong asked Huineng: “When the Fifth Patriarch passed on the robe and the bowl to you, what were his instructions?”

Huineng said: “He provided no additional instructions except that we must learn to see our own original nature. He did not speak of spiritual liberation through meditation, because that would add one more thing to the Buddha’s dharma, and the Buddha’s dharma is the only path.”

Yingzhong had never heard it expressed quite that way before. He asked: “How is the Buddha’s dharma the only path?”

Huineng explained: “It is exactly as you have taught from the Nirvana Sutra. Once, the Buddha was asked about the criminals who had committed every crime imaginable. Would such people be forever cut off from Buddhahood? The Buddha replied that this potential in all sentient beings to become enlightened was beyond all good and bad, all virtuous deeds and criminal actions. Where ordinary people saw differences, the wise ones saw only an essence that could not be cut off or separated from anything else. This is the oneness of Buddha nature.”

These words filled Yingzhong with the joy of understanding. He exclaimed: “When I listen to others explain the sutra, it feels as valueless as rocks. Now, as I listen to you, the dharma feels as precious as gold!”

Yingzhong conducted a formal ritual for Huineng, cutting off his hair so his appearance would match who he was within — a Zen Buddhist monk. Thereafter, Yingzhong and the monks revered Huineng as their teacher, and this marked the beginning of Huineng’s work to spread the dharma.

One day, for one of his lectures, Huineng related his experience — his life up to that point in time. At the end of his tale, he said: “I look back fifteen years to the night I received the dharma, and I recall to mind the hardship I went through. Sometimes, my survival seemed as tenuous as a strand of spider web. For me to be here and share the dharma with you — this must be due to some sort of karmic affinity that we all share.”

He paused to look at the crowd. In addition to monks and nuns, there were also people from all walks of life who had come to hear him speak. He continued: “Perhaps we have done some good in our previous lives, and that is why we have this opportunity to gather here today. The teachings we study together is not from me, but from the ancient sages. In order to learn their wisdom, we must clear the mind and quiet our thoughts. Anyone who can do that will be able to let go of confusion — and become no different from the sages themselves.”

This was the final note for the day. All present felt fortunate to be there and hear how the Sixth Patriarch came to be. They bowed to Huineng to express their gratitude, and the class came to a close.

Huineng was fortunate to encounter Master Yinzhong. As an accomplished teacher and authentic cultivator, Yinzhong lived life without the self-centric ego. Quite naturally, he perceived Huineng as a teacher, not as a threat to his authority.

Some people might be impressed by complex theories and obscure terms, but Yinzhong knew genuine wisdom was quite the opposite — plain, yet profound. It was not difficult for him to tell that Huineng expressed the dharmic truth. For him, this was a better proof than the robe and the bowl.

Huineng further pointed out that, ultimately, what the Buddha taught was oneness. All the commentaries and elaborations added on subsequently were extra layers. They were meant to clarify or explain, but often they ended up obscuring the original instead. Huineng’s gift was to peel them back, discard the excess, and zero in on what truly matters.

For someone like Yinzhong, after so many years devoted to the endless sutras, this was like a breath of fresh air. Previously, his only option was learning from those who lacked a complete understanding, and could only offer approximations. Now, he was suddenly able to converse with someone who experienced enlightenment firsthand. No wonder he felt it was like going from rocks to gold!

Huineng, no longer a fugitive, settled down to begin his dharmic ministry. From time to time, he reflected on the dramatic events of his past. The more he looked at how destiny unfolded for himself and others, the more he could perceive the karmic patterns woven into the fabric of life.

In that perception, there were no accidents. Everything happened for a reason, and for a greater purpose. In just the same way, it is no accident that brought you to this page, reading these words. As Huineng said, there must be some sort of karmic affinity at work here, to let us come together like this, and share the dharma with one another.

The oneness that the Buddha taught can be ours. All we need to do is clear the mind and quiet the thoughts. This may be one of the most difficult lessons we will ever attempt, although one certainly cannot deny its nature is simplicity itself. We should count ourselves fortunate to even be aware of it. That gratitude is the perfect mindset for us… as this chapter comes to a close.