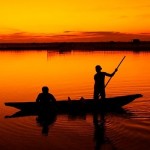 Huineng had to run, but he had no idea which way to go, so the Fifth Patriarch took him down the mountain road. They arrived at the river, where they boarded a small boat.

Huineng said: “Master, please be seated and leave the rowing to me.”

The Fifth Patriarch said: “I should be the one to ferry you across.”

Huineng replied: “Master, when I was lost, you ferried me to the shore of enlightenment. Now that I have some understanding, I should be the one to ferry myself from this point on.”

The Fifth Patriarch was delighted. “Yes, exactly! I can see you will be the one to spread the dharma in the future. Head south, and do not rush into the task of establishing yourself. It will not be easy to get the teaching started.”

They got to the other side of the river. Huineng said goodbye and started on his way. The Fifth Patriarch returned to the temple, and for several days did not come out of his room.

The disciples became concerned. They asked him: “Master, are you feeling unwell?”

The Fifth Patriarch said: “I am fine. The robe, the bowl and the dharma have gone to the south.”

This alarmed all of them. They pressed: “Master, who inherited your mantle?”

The Fifth Patriarch said: “The one who understands has received it.”

The disciples realized it had to be Huineng, who had been missing for several days. They were all outraged. How could this southern barbarian steal the greatest treasure from their temple? Several hundred of the disciples banded together to go after Huineng. They vowed that this heinous crime would not go unpunished!

The Chinese character for “ferry” is du. It is often used as a metaphor for helping others cultivate spirituality. The same character can still be used for its original meaning, to take a passenger onboard a boat across a body of water. Its meaning in a given situation depends on the context.

The du metaphor is part of the overall paradigm of eastern thought. Life is compared to ku hai, the ocean of bitterness, because there is suffering everywhere, and happiness always seems so fleeting. The truths taught by teachers such as the Buddha are like a vessel that we can use to navigate this ocean. Our goal is to sail for the land of enlightenment, the harbor of spiritual liberation.

In view of this, the exchange between Huineng and the Fifth Patriarch makes a lot of sense. Huineng started out lost in the ocean of bitterness, just like everyone else. The Fifth Patriarch came to his rescue, sailing the vessel of the Zen tradition. By teaching the truth of the Diamond Sutra, it was as if the Fifth Patriarch pulled him out of the water and ferried him to his destination.

Having attained enlightenment, Huineng now had a vessel of his own. It was now up to him to continue on with his own voyage — to ferry himself to the next destination. In that process, he would come across many people lost at sea, and he would help them just like the Fifth Patriarch helped him.

Not everyone wanted to be rescued, however. The angry disciples did not think he “deserved” to be in a position to ferry anyone. That position was reserved for someone of a higher social class, one of their own, not a nobody who who came from a distant land. They moved toward Huineng, not to be ferried, but to drag him down, back into the ocean.

Think about how the above is reflective of our world. Sometimes, we also see people who try to tear others down. Often, their resentment and rage are directed at their target’s place of origin or ethnic background. Keep this parallel in mind as we continue to follow Huineng’s journey. There is much we can learn from it: the danger of bigotry based on superficial attributes, and the better way to live when we look at the disciples as a counterexample — a reminder of what not to do and how not to be.